The principle of the “rule of law” is basically that no one is above the law. It requires that all arms of Government must exercise their powers in accordance with clear, well established rules and legal principles rather than rule by arbitrary decisions.

In pursuance of the principle of the “rule of law”, the prime function of the Legislative Assembly of Tonga is not only to make laws, but to ensure such laws are made clear and legitimate by their dispensation through the proper law-making processes.

There are two types of Bills that can be submitted to the Legislative Assembly, namely- 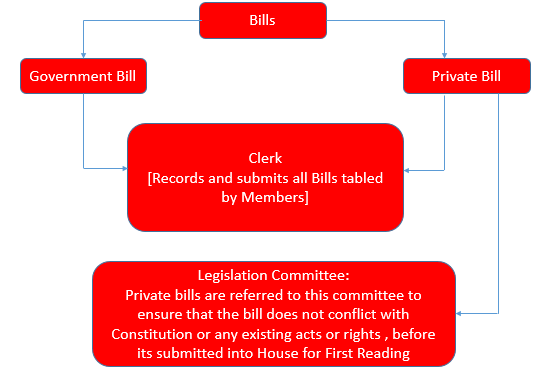 Origination of a Bill

Legislative process a bill must go through before becoming an Act.

When a Bill is tabled in the Legislative Assembly, it must be processed through the 1st reading before the member submitting the Bill can introduce it to the Assembly.