“We are sinking, our islands are sinking, we are suffering”, Tonga’s Commonwealth Youth Parliament 2022 representative’s plea to world leaders 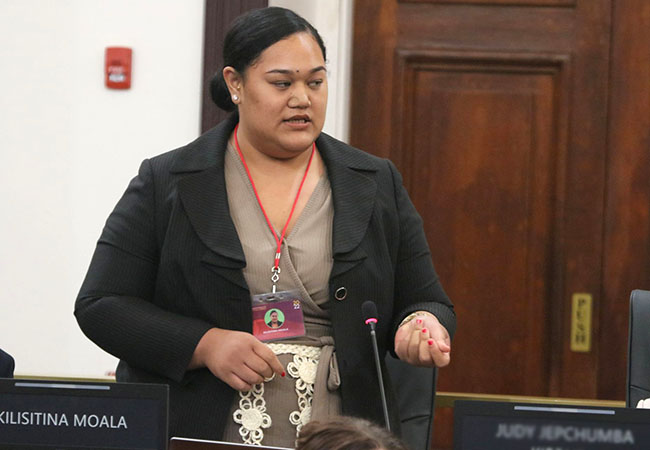 Kilisitina Moala, of Tonga, makes her contribution during the Commonwealth Youth Parliamentarians debate in Trinidad and Tobago on 23 November, 2022. Photo: Office of the Trinidad & Tobago Parliament.
PC: The Guardian

Kilisitina Moala, Tonga’s representative at the 11th Commonwealth Youth Parliament (CYP) 2022 has reminded world leaders that small countries like Tonga and the Pacific nations are sinking due to the severe impact of climate change.

Very emotional Kilisitina Moala made the remarks when delivering a strong and sincere statements for Tonga during a debate on a Bill for Remote Workplace operations for the fictional country of “Kairi and Chaconia.”

This year’s event is hosted by the Parliament of the Republic of Trinidad and Tobago for CYP delegates from most Commonwealth’s 56 member countries.

CYP is one of CPA’s most popular programmes that brings together participants aged 18-29 for a weeklong interaction of young people from the Commonwealth including Tonga with ambitions of public office. It is designed to demonstrate the potential future young parliamentarians the fundamentals behind the processes of Parliament.

Ms. Moala represented Tonga as a Government MP and were among CYP delegates debated a Bill for Remote Workplace operations. As the only representative from the Pacific Ms. Moala said throughout the parliamentary setting, neither one has mentioned any pressing issues from their country of origin.

She broke into tears when spoke from an environmentalist perspective on the Bill and made reference to Tonga and the Pacific which are more prone and vulnerable to the impacts of climate change.

“As a representative of the Kingdom of Tonga and the Pacific Island Nations to the 11th Commonwealth Youth Parliament, I plead to all leaders who are here with us and joining us virtually … “WE ARE SINKING, OUR ISLANDS ARE SINKING, WE ARE SUFFERING,”

I would not live my life to see our beautiful islands being lost to the sea, within these islands lies our future and I won’t rest my case here but I will continue to use any platform and any opportunity to let my voice be heard,” said Moala in tears.

The CYP debate was suspended for several minutes after Moala broke into tears.

The former She Leads Fale Alea 2019 MP also spoke on behalf of Tonga and the Pacific that only contributes 0.3 percent gas emission yet stand vulnerable to the traverse effects of climate change, global warming and natural disasters.

Tonga is classified as the second most high at-risk country in the world in its exposure to natural hazards and the unfolding effects of climate change. Tonga is at risk to tropical cyclones and storms, tsunamis, volcanic activity, and drought. Tonga has recently witnessed the Hunga Tonga Hunga Tokelau’s volcanic eruptions which had prompted the tsunami warnings that left devastation effects in Tonga on January 15.

On that note, the Tongan Assistant Geology Moala on Wednesday called on the CYP 2022 to hear her voice and “let youth speak for they are agents of change, youth are our future, and the future is NOW"!

All CYP speakers rose and applauded Moala after she concluded in tears, calling on world leaders to make wise decisions on climate change issues.

“To all leaders listening in, be mindful of all decisions making. Always put in mind the small island nations who is suffering the enormous consequences of climate change. Our choices today, determines the outcome of tomorrow.”

“Every morning when I wear my 'kiekie' or 'ta'ovala' it is a constant reminder of who I am representing. This gives me strength and power to speak out and plead my plea in such platforms that leaders from across the world are tuning into,” shared Ms. Moala

While in Trinidad and Tobago the former She Leads Fale Alea Chairwoman was also making news for her contribution to the debate at CYP on the "Remote Working Bill" from an environmental perspective.

She was also featured in print newspapers, and on Trinidad and Tobago Broadcasting Commission showing the real impact of her words, and the hearts they touched: video attached.

You can watch her speech live at this link: