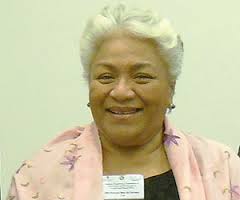 (1) In 2013, with the support of the Parliament of Australia, and under the auspices of the Pacific Women’s Parliamentary Project (PWPP), the parliaments of the Pacific Island nations made the unheralded but milestone renewed commitment, to rectify the age old numerical predominance of males in our parliaments, and to consequently reduce the age old shortcomings of this gender imbalance upon our Pacific legislatures and nations.

(2) Today Tonga is honoured to host our second PWPP conference, which is on the important theme of “The Pacific Women’s Parliamentary Partnerships.” Accordingly, on behalf of the Speaker of the Parliament of Tonga, Lord Fakafanua, it is indeed my very great pleasure to welcome you all to our Friendly Island shores, and to our shared deliberations, upon a subject so vital to the welfare of our nations.

(4) Currently in April of this year the first ever Practice Parliament for Women was held. The programme was envisioned to instigate and encourage women’s participation in Parliament and its integral processes by raising everyone’s (particularly women) awareness, interest and participation in Parliament via discussion forums and practical legislative training provided by current and former Parliamentarians and expert Secretariat Staff. The week-long event was broadcast live on television and radio and generated massive public interest. Also, as a result of that Practice Parliament, a number of women have come forward and announced that they will run in the upcoming general elections in November. We keenly look forward to following their political careers.

(5) The issues pertaining to the concern of our conference are not only numerous, and deeply entrenched in our societies, but they are also common knowledge. For example, there is a serious and entrenched gender imbalance continues to rob our legislatures of many essential and quality outputs from our women is equally well known. And, that the heightened responsibilities of legislatures today, as demanded by the greater complexities of society, urgently necessitate the shared wisdom of both genders, is also universally well known.

(6) At the same, it is equally well known that the entrenched mindset of both genders in our societies, not only regard Parliament as the “rightful domain” of males, but they also regard the women who may dare to stand for election, as “too ambitious, too strong, and male like,” and also lacking the home focus which “good” women have. Not surprisingly, only a minority of women ever dare to stand Parliament.

(7) Ladies and gentlemen, with due respect, and given the foregoing, our Parliamentary elections are like races between the two legged, who are the men, and the one legged, who are the women. They are never races between equals, but are always between the strong and the disadvantaged. Our question and our challenge today is – “When are we ever going to break out of these mindset shackles, and smell the roses of unimpeded gender equality to compete?”

(8) An inevitable outcome of this situation, is that it takes women of super strength and character to succeed and survive there. And that is exactly what is happening. The lady Parliamentarians who are here today, are in fact not only the nationally and internationally reputable Parliamentarians and leaders that they are, but they also “real women of substance.”

(9) The Hon. Fiame Naomi Mataafa, for example, Samoa’s Minister for Justice, has been a Member of Parliament for twenty nine years 1985 – 2014, and a Cabinet Minister for twenty three consecutive years, 1991-2014. The Hon. Teima Onorio is the Vice President of Kiribati while the Hon. Maere Tekanene is their Minister of Education. Also, the Hon. Nikki Rattle is the Speaker of the Cook Islands, while the Hon. Julie Soso Akeke is the Governor of the Eastern Highlands, Papua New Guinea.

(10) At the same time we also proudly note the exceptional qualifications and expertise brought by our sister parliamentarians from Australia and from the whole Pacific regional, and again we hail you as women who have triumphed in a predominantly male world of politics, and are indeed the angels of gender balance in our Pacific legislatures.

(11) As a member of our Tongan and Pacific community, may I assure you, that whilst we are aware that attitude change, especially on the subject of gender in Parliament, is most difficult, the progress which your careers have testified to, as well as your ongoing commitment to our common goal, have bolstered our confidence and trust, that shall succeed.

(12) The other and equally important mission of our organization, and of our Tonga Forum this week is to help accord our nations the highest legislature empowerment which a more gender balanced legislatures can give. Apart from impacting adversely upon the quality of the performance of legislatures, gender imbalance also has other less obvious but very major disadvantages. Legislatures are the core institutions of democracy, and are elected by the populace in all nations, and this populace consists of men and women who are in fairly equal ratios. However, when the gender representation in their legislatures are so highly imbalanced, the women’s points of view are consequently “disenfranchised,” and the true spirit of democracy wherein direct representation is a core factor, is seriously compromised.

(13) Gender balance in Parliament, however is not only a philosophical necessity, it is also a practical one. Very briefly, women constitute about half of society, and they know their issues best. As they are the wives, and mothers of society, their judgments, perspectives and contributions to the legislative processes are essential to all. What is the wisdom in one gender speaking for the other, instead of both participating? Gone are the days when the women’s wisdom, perspectives and judgments are conveyed to parliaments through second persons. All Parliaments are the poorer when they do not have the full and direct participation of both genders.

(14) Honourable parliamentarians of our Pacific family of nations, having unraveled and laid out our challenging subjects as we have done today, I now feel that because our mission is so logical and so right, and because our motives are equally sincere and are genuinely for the welfare of our peoples, then all that remains for us to do, is to commit them all to the loving care of our Heavenly Father, who is the universal Carer of all nations.

(15) I wish you all a most successful conference, a most enjoyable stay in Tonga, and a safe return to your homes and families.